This being his senior year, Coach Johnathan Gilbertson hopes Rork can win it all before taking off for Seattle University to play baseball.

The Eagles start their season at home against Kamiak Nov. 30.

The coach said Rork isn’t the only Eagle who will be hard to beat.

“We’re gonna be tough this year,” he said.

Gilbertson said Will Rush is “hungry” after going to state as a sophomore but not last year.

Junior Kristian Fairbanks is “strong and done a lot of work” in the offseason, and Sam Rush is “coming into his own,” the coach added. Both made regionals last year.

At 106 pounds, the coach expects Daniel Heiss to excel after being an alternate to state last year as a junior.

As for underclassmen, Gilbertson likes what he’s seeing from Justin Wammack, a sophomore.

As for being in shape, the coach said, “not at all. Football is a different kind of shape. But they’ll get there.”

Jim Smoots coaches the girls team, which has 20 members.

Others who placed in the top six at district a year ago are: Leah White; Destinee Williams; Sophia Wheeler; Taylor Cochran; and Mikayla Kolbeck is back after an injury.

“We have a big group of freshmen who show promise. They’re athletes, but all rookies” at wrestling, Smoots said. 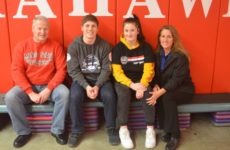